the series: the Something and the Nothing 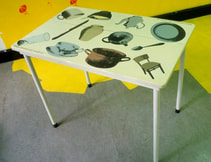 The series "The something and the nothing' consists of both paintings and drawings in mixed-media. I became fascinated with the seventeenth-century still life. Research by Sam Segal (Flowers and Nature; Hijnk, Amstelveen 1990 & A Prosperous Past, SDU, The Hague 1988) made clear that still lifes are not just about the most realistic rendering of textures, but still lifes also express a world of spiritual and psychological truths. This was in keeping with a theme with which I previously worked, when I painted a variety of 'archetypical', everyday objects on a common kitchen table, under the title: "What dreams are made of."
From the idea that everyday objects can have a spiritual, psychological and emotional value in life, in short: can have meaning for people, I worked on a contemporary still life. Eventually the road I took didn't convince me, and I decided to change gear. The Something and the Nothing is the result of that process. Objects from my personal environment, along with design principles from, for example, the towels I inherited from my grandmother, formed along with photos from family history the elements with wich the series came about. From the imagery arose a theme of shapes being both there and not there at the same time, because they blend into other forms. I also removed my handwriting (the personal trait in painting) initially entirely from the series, so I expressed the personal and the meaningful impersonally. The everyday, meaningless objects can now appear in their transcendent value and settle themselves into the coherent perception of emotional meanings of the viewer.